WHERE OUR VINEYARDS COME

The territorial scope Friuli eastern hills, was defined in 1970 with the approval of the product specification of the then Eastern Hills of Friuli DOC. It includes the entire hill chain of the eastern portion of the province of Udine, starting from the north, covers the municipalities of Tarcento, Nimis Povoletto, Attimis, Faedis, Torreano, to the east of Cividale, San Pietro al Natisone, Prepotto. Then it goes (south-west) towards Premariacco, Buttrio, Manzano, San Giovanni al Natisone and Corno di Rosazzo, for a total of more than 2000 hectares of vineyards. These altitude measurements between 100 and 350 meters above sea level, just to homogeneous climatic conditions and the geological origin.

The wines produced in this area are the result of a terroir, ie the combination of land - climate - grape, particularly favorable. The optimal climatic conditions have allowed the cultivation of native vines, or born and acclimatatasi the special conditions soil and climate of the Eastern Neck or are cultivated here since time immemorial, as well as other varieties from different parts of Europe, which here are well adapted to produce considerable results in terms of quality.

The production Friuli East Neck, strictly contained in quantitative terms, is characterized by the dexterity of the grape harvest. 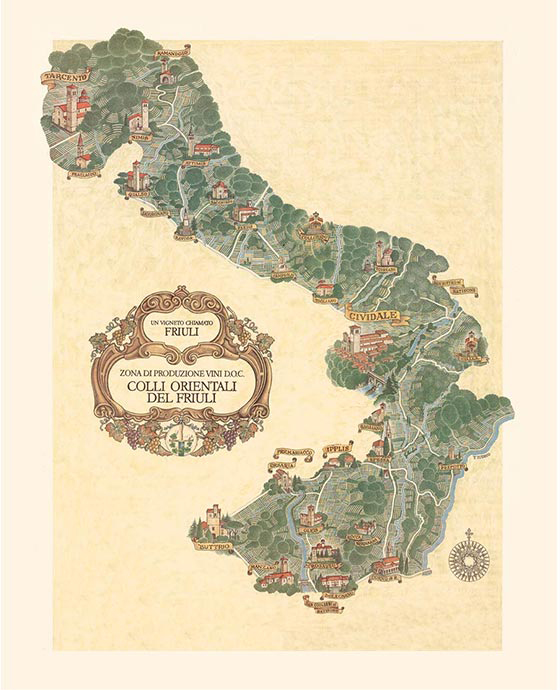